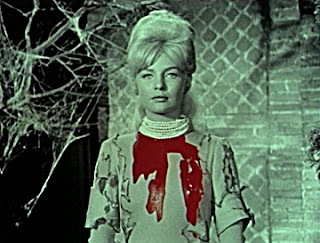 Does the presence of vampires automatically make a film a horror movie? This used to be an interesting question back in the day, you know, before it could be answered with two simple words: "Duh, Twilight."  As horror fans, I think we've definitively kicked that series the hell out of our genre and sent it home with its fluffy werewolf tail between its legs. But what to make of Blood and Roses?  After all, it is the film's tragic and romantic elements that drive it, and like in Twilight, the supernatural part is merely a vehicle used to explore other themes.

The difference, I suppose is that Twilight is a money-making machine rushed into production to cash in on the popularity of the latest (semi)literary phenomenon, while Blood and Roses is an artfully-made film based on a classic gothic tale from 1872. Basically, we want Blood and Roses included in our genre because it doesn't suck.

The best thing about Blood and Roses is its original take on the vampire mythos. Millarca is not your garden-variety drain 'em and leave 'em bloodsucker. When we first encounter her, she is no more than a voice in Carmilla's head.  Right away, this sets up the audience to question whether this is a case of supernatural influence or some sort of psychotic break with reality. When Millarca appears to Carmilla, the audience never sees the vampire, only Carmilla's reaction. In fact, the whole film is set up to screw with the audience's sense of reality. My only complaint here is that in the end, the voice-over narration spells everything out explicitly, denying the audience the pleasure of piecing it together themselves.


The highlight of the film is the hallucination/dream sequence. Carmilla approaches her cousin's fiancee, Georgia, as she sleeps, moving aside her nightgown at the neck to take a bite. But the bite is never shown. Rather, the picture goes black and white, and Georgia has a vision of Carmilla bleeding copiously from under her necklaces, which is striking because the red of the blood is the only color on-screen. This is followed by a sequence of increasingly bizarre images, such as a girl swimming upside-down outside the bedroom door, a long tunnel with a queue of hundreds of seated women (victims or incarnations of Millarca?), and a topless Carmilla strapped to a surgery table while masked nurses with red gloves prepare her for some nameless procedure. 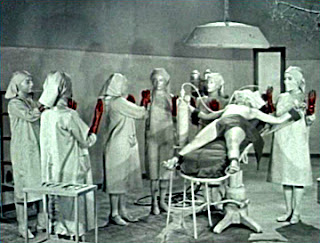 Going into the film, I had heard it was a lesbian vampire movie. Once I'd figured out that it wasn't exactly a horror movie, I just figured it would be a lesbian romance thinly disguised as a vampire film. But after watching it, I'm honestly not sure what to make of the film's homoeroticism. There's no doubt that a lesbian undercurrent runs through the film, but I'm not entirely sure why it was there, since the whole plot centers around Carmilla being in love with her cousin Leopoldo and being jealous that he's getting married.
Still, there's all kinds of meaningful gazes and exchanges between Carmilla and Georgia, who even share a kiss (there is a drop of blood on Georgia's lip, giving the filmmakers a defense in case of attack by 1960s homophobes). Also, part of the film's vampire mythology is that female vampires only feed on females, which has got to mean something, but I'm a little too dense to figure it out. I wouldn't be surprised if there was a social statement hidden somewhere in there. After all, horror has always been a transgressive genre, and was therefore one of the few media available in 1960 in which to address taboo subjects.
I did find the movie to be somewhat insulting to women. The female characters are treated as fragile, flighty, silly things who must obey the men in their lives. But I don't think the filmmakers had any sort of misogynist agenda; it is just an artifact of the time it was made.
I've read that in the original French version, the narration is performed by the character of the doctor, rather than by Millarca, and that it's much lighter on exposition. The narration, especially at the end, is heavy-handed, unnecessary, and a little damaging to the experience. I've also read that the Netflix version is the dubbed version, but it looks like they're speaking English to me. Anyone know the real deal on this?
Overall, I enjoyed Blood and Roses in the same way I enjoy most Hammer films: not as scary movies, but as gorgeous pieces of gothic diversion--a comforting escape from both the world and the intensity of modern horror. This is a beautiful film that I will want to return to, even if there are more roses than blood.
Posted by Marvin the Macabre at 10:42 PM